THE JOYS OF PARENTHOOD

Hello to all you ladies and gentlemen, boys and girls, mummy’s and daddy’s, vagabonds and convicts, PI’s, post-docs and students (at least one group will probably not be reading). What's the big news that requires such an all inclusive introduction to people from all walks of life? I am proud to announce that I am now a parent and have fathered a PhD thesis weighing in at 202 pages, with 120 references and it goes without saying that she is such a beauty. I was filled with joy when the printers presented her to me, with her blue cover page and perfect binding. Tears came to my eyes as I held her for the first time and looked her over. From her 14 point bold calibri level 1 headings to her 12 point double spaced justified text. I was glad to see she had no deformities, an introduction, methods, 3 results chapters and a discussion all in the right places. I named her "Synaptic modulation in the dorsal cochlear nucleus, a biological substrate of tinnitus" or Smits for short (pronounced Schmidt in some weird recognition to my non-existent German heritage). 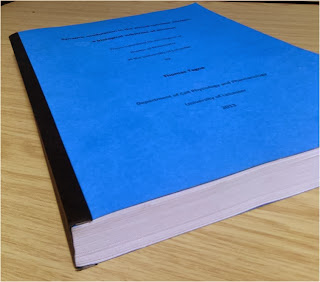 All hail Smit the great

Allow me to take you through the journey of how Smits got to be here, and what a journey it has been. Smits was conceived on the 1st of September 2009 after my part-time love relationship with Science became the real deal and we decided to move our relationship forward. Our love was so strong and sure we went straight from undergraduate to doctorate status. Like a few other couples I know we chose to bypass the whole Master's phase. Four years since this update in relationship status, my relationship with Science has had its trying times. The hardest of which was when I had to learn electrophysiology in preparation for Smits's arrival, a skill which comprises fifty percent 'know-how' and fifty percent luck.  To give you an idea imagine trying to pierce a pea-sized water balloon with a needle only that your pea-sized water balloon is about fifty times smaller than an actual pea-sized water balloon (assuming those exist). 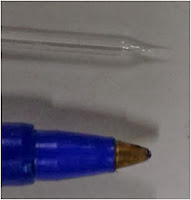 Good luck, may the ‘driving’ force be with you

After your first five hundred successful attempts you are unofficially an electrophysiologist, and Grandmaster status is only reached after ten thousand successful attempts. There were however many great times, when I visited many places on this huge island I call home to have Smit’s progress vetted by experts, and yes I do mean the UK. Both national gatherings in London and Leicester (Departmental seminars) and international crowds in Edinburgh (PhySoc 2012) saw experts and professionals peruse over her content each with helpful suggestions. Less professional gatherings in Nottingham (Vitae regional finals 2012) and Leicester (Brain Awareness Day 2012), saw individuals express their opinions and delight about her growth and progress. Now that Smit is here the story doesn’t end there, she has one more expert scrutiny to go under. She will be scrutinised page by page by two others before me who also fell in love with Science and have had babies of their own. Two others who have been together with Science, even before that faithful day I met her aged 8 learning about photosynthesis. Two others who will decide whether Smit should be accepted as she is. Two others who will decide my love for Science is worthy enough to be acknowledged and as such induct me into the not-so-secret society where all lovers of science go by the name ‘Doctor’ (rumour says some get a complimentary TARDIS). However I have no fear, because I, her father will be there to defend her to my last breath. I will answer every question, explain every misunderstanding, and express why bringing Smit into the world is the best thing that ever happened to Science.

Thomas Tagoe
Having completed a PhD investigating how tinnitus occurs, I am now looking for ways to share the science and everything else I love from a perspective which takes into account all that I am. I am a scientist, a Christian, sports and music lover, comic connoisseur and love public speaking/engagement of all sorts.